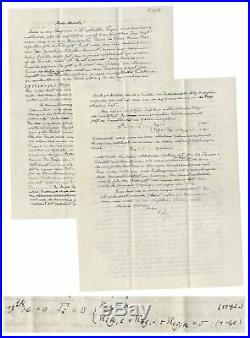 Albert Einstein autograph letter signed in April 1950, shortly after his article “On the Generalized Theory of Gravitation” appeared in “Scientific American”. Einstein replies to a letter from his closest friend, Michele Besso, with wide-ranging content spanning the spiritual (even referencing God as “Him”) to his Unified Field Theory, with equations from the theory in his hand (“A certain mathematical question has occupied me lately”) that he believes neutralizes his critics. Einstein also takes aim at quantum physicists (“there is no such thing as a’particle’ in the strictest meaning of the word”) and even tackles the tricky issue of knowledge itself no guarantee that it will ever be possible to know whether the theory is’true. At the age of 71, Einstein is seeking to augment his Unified Field Theory, creating an umbrella theory for Special Relativity and Gravity, and seems frustrated that “contemporary physicists” appear content with theoretical abstractions without proving the equations underpinning them. In fact, he predicts that they will eventually see the need for evidence: they clearly have the right to condemn my method as unproductive. But it will not be like that in the long run. They will see, very slowly, that you cannot get closer in depth to things with the quasi-empirical method. Datelined from Princeton, 15 April 1950, this unique and very personal letter by Einstein melds the philosophical with the scientific and gives insight into the disciplined scientific mind of the great physicist. Translated from German, letter reads in full, Dear Michele! / The questions that you posed in your letter of 04/11 are completely natural but, for the time being, they cannot be answered. The reason for that is that no real definition of the field exists in a consistent theory of the field. It is true that, consequently, one ends up in a situation comparable to that of Don Quixote, since there is absolutely no guarantee that it will ever be possible to know whether the theory is’true. There exists no bridge a priori that could lead to empirical evidence. For instance, there is no such thing as a’particle’ in the strictest meaning of the word, because this does not fit in with the program of representing reality by functions that are everywhere continuous, even analytical. In theory, there exists, e. [see attached translation for equation]. There also exists a geodesic line for this. But in the first place, we have no reference point that might show that these lines possess any physical significance, not even approximately. It boils down to the fact that a comparison with the empirically known can only be expected from finding rigorous solutions to the system of equations, in which empirically’known’ constructs and their interactions are’reflected. Since this is tremendously difficult, it is easy to comprehend the contemporary physicists’ skeptical attitude. For the moment, they clearly have the right to condemn my method as unproductive. In order to really understand my conviction, you will have to turn over in your mind, again and again, my answer in the collective volume and the short article in Scientia. The question of’causality’ is not really the central one, but rather the question of real existence and the question of whether there exists any kind of strictly valid (not statistical) law for the theoretically represented reality. It is completely evident, that such laws do not exist for the observable facts. But the question is, is there a substitute for’reality’ as a theoretical program? Using your language, I would say: If the’cloud’ is not the expression of a singular fact, but only a’probability cloud,’ some thing with more characteristics must exist behind the cloud. Thinking that this is irrelevant for the theory seems to be fairly absurd. This is why people usually assert that the [see attached translation for symbol] function describes the individual case in its entirety and they only give up on this when one corners them on account of it. A certain mathematical question has occupied me lately. From an applicable variational principle there follows the compatibility of the system of equations. [see attached translation for equations]. On the other hand, formal reflections force us in the direction of the stronger system, in which the last two of the equations are replaced by. However, the compatibility of this stronger system is problematic; i. One does not know whether the multiplicity of one’s solutions is sufficiently large. After many errors and much effort, I succeeded in proving this compatibility. Of course, this does not prove anything as to the’truth’ of the theory; but the most important formal counterargument to it has disappeared. There is one thing that I have learned in the course of a long life: It is devilishly difficult to get closer to’Him’, if one does not want to remain on the surface. Two page letter on 8.5″ x 11″ sheet is near fine and accompanied by original envelope postmarked from Princeton on 16 April 1950. Also accompanied by a four page reply letter from Besso, with complete translation for both letters. The item “Albert Einstein Autograph Letter Signed on God &Science” is in sale since Friday, May 29, 2020. This item is in the category “Collectibles\Autographs\Science, Inventor”. The seller is “n8sautographs” and is located in Los Angeles, California. This item can be shipped worldwide.