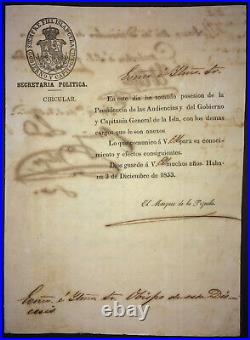 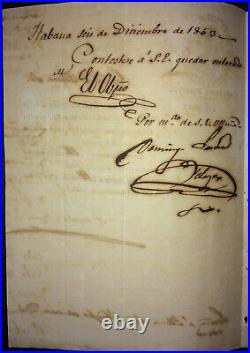 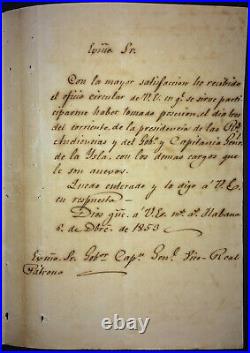 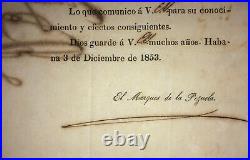 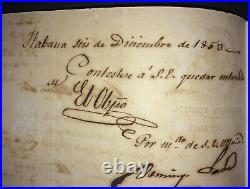 1853 Colonial Spain Signed Captain General CONDE PEZUELA Takes Power in Antilles. Juan Manuel González de la Pezuela y Ceballos, conde de Cheste. Letter addressed to Bishop of Havana who also signs on second page upper left. Another note on page three. Dated in Havana on December 3, 1853. Three pages of text. Juan Manuel González de la Pezuela y Ceballos, count of Cheste (Lima , Peru , May 16, 1809 – Madrid , November 1 , 1906) was a nobleman , politician of conservative ideas, military , writer and Spanish poet. Also a man of letters, in 1875 he was elected director of the Royal Spanish Academy. The liberal newspaper El Globo defined it as “conservative, in the most retrograde sense of the word” and the Marquis de Rozalejo as an Elizabethan traditionalist. He was born in 1809 in Lima, Peru, the son of Lieutenant General Joaquin de la Pezuela , the last Viceroy of Peru and I Marquis de Viluma. Being the second son of a noble and military, he decided to play the path of arms. He fought in the First Carlist War , where he had an outstanding performance serving on the Christian side and distinguishing himself in the battle of Cheste. When the regency of Espartero was proclaimed, he conspired with Diego de León y Concha in favor of María Cristina de Borbón , a conspiracy that led to the pronouncement of October 1841 with the failed attempt to assault the Royal Palace of Madrid. He was elected deputy in 1843 without taking his minutes for the dissolution of parliament. There he imposed the hated Regime of the Notebook, which was a covert slavery for the inhabitants of the island, forcing them to work on the estates for a bad pay or nothing. The day laborers had to carry a notebook at all times that evidenced their work. Later governor of Cuba from 1853 to 1855. During the reign of Amadeo de Savoie and the First Republic he is marginalized from important positions, not regaining part of his prestige until the Bourbon restoration. He died in the city of Segovia in 1907 with ninety-eight years. Condition; Very good with just minor wear. The item “1853 Colonial Spain Signed Captain General CONDE PEZUELA Takes Power in Antilles” is in sale since Sunday, October 20, 2019. This item is in the category “Collectibles\Autographs\Historical”. The seller is “old_world_collectibles” and is located in Toronto, Ontario. This item can be shipped worldwide.