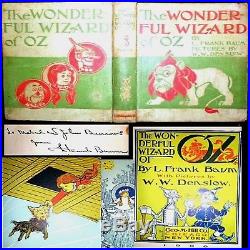 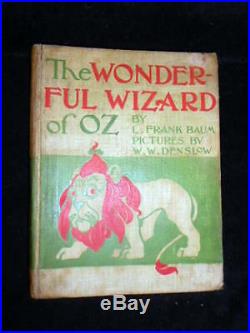 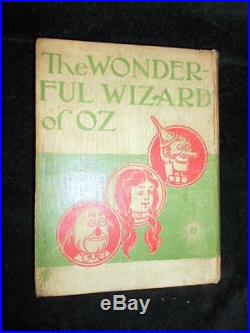 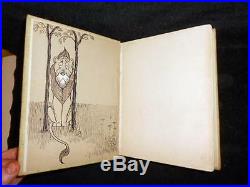 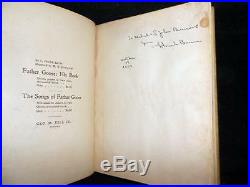 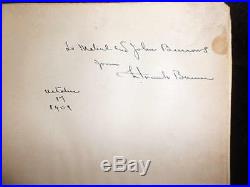 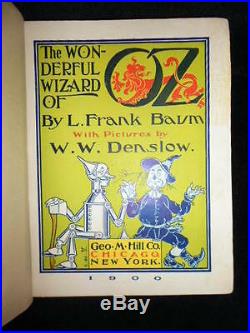 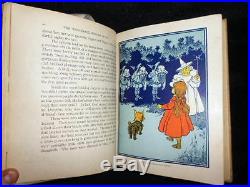 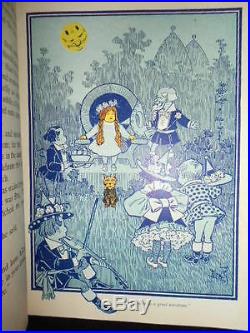 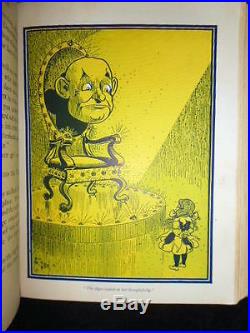 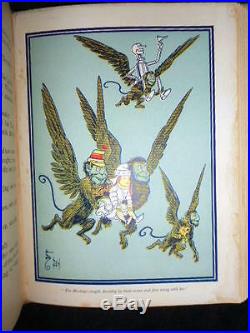 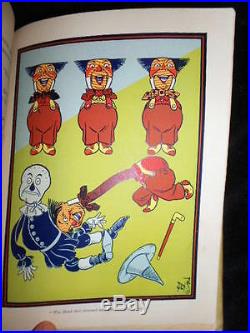 Frank Baum ; First Edition, 2nd State Text ; Chicago, New York, George M. Denslow; 259 Pages, Blanks; w6.8″xh8.8″; Re-backed with original cloth spine laid down; Extremely Rare! 2nd State of Text Points, binding “C”, 1st State of plate facing pg. 34 with two dots on moon, 2nd state of plate facing pg. 92; Inscribed by the Author; To Mabel and John Burrows from L. Original off white cloth cover design, Pretty red/green labeling/pictorials to boards/b inding. Pictorial inner boards, As issued with no end page design, Inscribed on first blank. Charming color pictorial title page, 23 other required brilliant color plates. Numerous color heading/in text illustrations throughout. And one of the Most Famous Children’s Classics! The Wonderful Wizard of Oz is a children’s novel. And illustrated by W. Originally published by the George M. In Chicago on May 17, 1900, it has since been reprinted numerous times, most often under the name The Wizard of Oz , which is the name of both the popular 1902 Broadway musical. And the well-known 1939 film adaptation. The story chronicles the adventures of a young girl named Dorothy Gale. In the Land of Oz. After being swept away from her Kansas. Farm home in a cyclone. The novel is one of the best-known stories in American popular culture and has been widely translated. Its initial success, and the success of the 1902 Broadway musical which Baum adapted from his original story, led to Baum’s writing thirteen additional Oz books. Lyman Frank Baum (May 15, 1856 May 6, 1919), better known by his pen name L. Frank Baum , was an American author chiefly known for his children’s books. Particularly The Wonderful Wizard of Oz. He wrote thirteen novel sequels, nine other fantasy. Novels, and a host of other works 55 novels in total, plus four lost. Novels, 83 short stories, over 200 poems, an unknown number of scripts, and many miscellaneous writings, and made numerous attempts to bring his works to the stage and screen. His works anticipated such century-later commonplaces as television. Laptop computers (The Mater Key), wireless telephones. (Tik-Tok of Oz), women in high risk, action-heavy occupations (Mary Louise in the Country), and the ubiquity of advertising on clothing (Aunt Jane’s Nieces at Work). Denslow (May 25, 1856 May 27, 1915) was an American illustrator and caricaturist remembered for his work in collaboration with author L. Especially his illustrations of The Wonderful Wizard of Oz. Denslow was an editorial cartoonist with a strong interest in politics, which has fueled political interpretations of The Wonderful Wizard of Oz. Some wear to edges, soiling/wear to boards, little glue added to corners to prevent further threading, re-backed/original spine laid down, some wear to hinge cloth, bumped lower front corner, front board bows up a tiny bit, some tattered edges to first/last few pages and a few plates, inscription page (probably from another copy) had back strengthened/removed/left side trimmed and laid down on another piece of paper, repaired slice near gutter of last two pages, some slices near edges here and there (about an inch or so). Hinges are very good, text block is good, could be tighter, tighter pages in beginning/end, some pages are getting delicate/taut when opened, but still all together, would handle with care, some light blemishing here and there/age toning, missing small corner to a few pages, most pages are good, majority of plates are clean. I like to send off after a week or so. Bubble wrapped and then wrapped in cardboard and mailed in a bubble wrapped envelope in most cases. The item “1899 WONDERFUL WIZARD OF OZ SIGNED L FRANK BAUM 1ST EDITION 24 COLOR ILL FANTASY” is in sale since Saturday, February 10, 2018. This item is in the category “Books\Antiquarian & Collectible”. The seller is “rogabooksllc” and is located in Boca Raton, Florida. This item can be shipped worldwide.