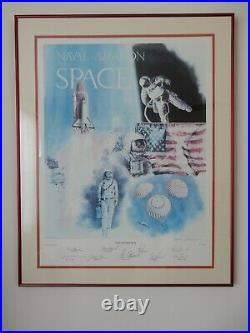 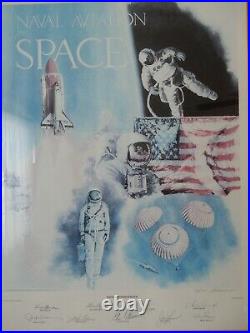 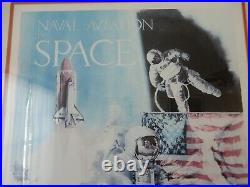 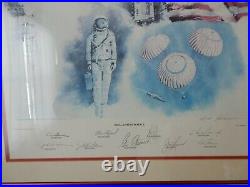 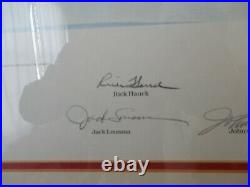 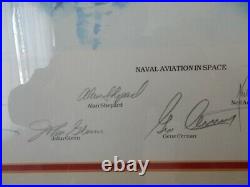 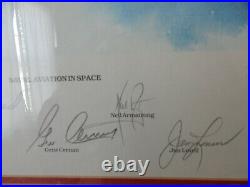 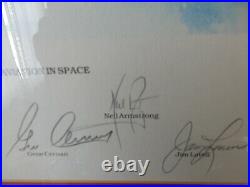 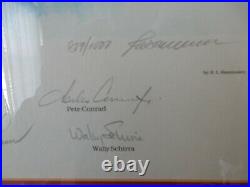 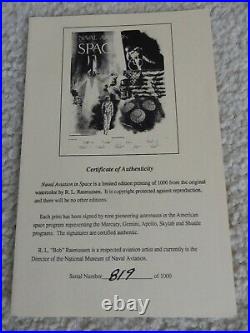 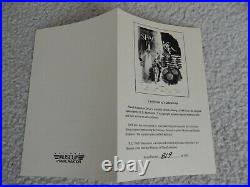 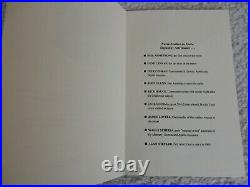 For sale is a limited edition watercolor collage by artist/Naval aviator (and former Blue Angels pilot) R. Rasmussen entitled Naval Aviation in Space. This color lithograph print (#819/1000) is signed in pencil by nine pioneering astronauts, all former Naval aviators, representing all of NASA’s space programs (Mercury, Gemini, Apollo, Skylab, and Space Shuttle System). Many of these signatures are rare and collectible (Neil Armstrong & three other moonwalkers, of which there are only twelve total). Neil Armstrong (Gemini 8; and Commander of Apollo 11, during which mission he became the first person to walk on the moon). Charles “Pete” Conrad Gemini 5; Commander of Gemini 11; Commander of Apollo 12, during which he became the third person to walk on the moon; and Commander of Skylab 2, the first crewed Skylab mission, during which he and his crewmates repaired significant damage to the Skylab space station. For this, President Jimmy Carter awarded him the Congressional Space Medal of Honor in 1978. Alan Shepard (Mercury astronaut, becoming the first American in space in 1961; and Commander of Apollo 14, during which he became the fifth person to walk on the moon). Gene Cernan (Gemini 9; Apollo 10; and Commander of Apollo 17, during which he became the last person to walk on the moon). Jack Lousma (Skylab 3; and Commander of STS-3, the third Space Shuttle mission). John Glenn (Mercury astronaut, becoming the first American to orbit the Earth). James Lovell (Gemini 7; Gemini 12; Command Module Pilot on Apollo 8, the first flight to/around the moon; and Commander of Apollo 13). Wally Schirra (the only astronaut to fly in the Mercury, Gemini, and Apollo programs). Rick Hauck (STS-7; Commander of STS-51-A; and Commander of STS-26, the first Space Shuttle flight after the Challenger tragedy). The nine astronauts were part of a symposium held at the Naval Aviation Museum in 1989. Rasmussen, curator and museum artist, published this print as a fundraiser for the museum, and the astronauts signed each one after a ceremonial dinner, all of them sitting at a table, passing each print to the next signer. The print itself measures 22″ x 29″ and is professionally matted and framed (the total size with frame is 25-1/2″ x 32″). The print, acid-free matte, lightweight metal frame, and UV protected glass are in flawless condition. This print comes with the original National Museum of Naval Aviation COA. Please feel free to contact me with Questions or Concerns. All sales are final. The item “Naval Aviation in Space Ltd Ed Print Signed by Armstrong & 8 other Astronauts” is in sale since Tuesday, July 2, 2019. This item is in the category “Collectibles\Autographs\Space”. The seller is “gucci04″ and is located in Matteson, Illinois. This item can be shipped to United States, Philippines, Cayman islands. 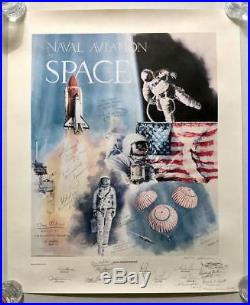 “Naval Aviation in Space” Ltd. Signed by 24 ASTRONAUTS including Armstrong, Aldrin, Glenn, Shepard! Here’s what you’ll receive.. Throughout the course of the United States space program, several of the most prominent astronauts got their first taste of flying as aviators in the U. Rasmussen, an artist and Director of the National Museum of Naval Aviation, produced a limited-edition printing of his watercolor work, Naval Aviation in Space. ” This outstanding example is numbered “694/1000 and signed by the original 9 astronauts: Neil Armstrong, Gene Cernan, Pete Conrad d. 1999, John Glenn, Rick Hauck, Jack Lousma, Jim Lovell, Wally Schirra, and Alan Shepard d. The litho is also signed by Rasmussen. Making the print even more unique are the signatures of 15 additional astronauts and cosmonauts, obtained over the course of several years. Additional signers include: “Buzz Aldrin Apollo XI’Magnificent Desolation; “Charlie Duke Apollo 16, The Wonder of it All! “Edgar Mitchell, 6th Moonwalker; “Alan Bean Apollo XII LMP, Moonwalker #4; “Richard Gordon Apollo XII CMP; “Walt Cunningham Apollo 7; “Brian Binnie, SpaceShipOne Astronaut 04-Oct-04; “Jon A McBride, Plt STS-41G; “Scott Carpenter, Aurora 7 24 May, 1962; “First Spacewalker Alexei Leonov; Ed Gibson Reach highAim higher! “Al Worden Apollo 15; “Rusty Schweickart Apollo 9 LMP; “First Woman in Space, Valentina Tereshkova Vostok 6; and “Guenter F. Wendt Pad Leader, MercuryGeminiApollo. This is the only print to contain these additional 15 signatures, making it super rare & desirable. Each additional signer has also added a descriptive inscription. The signatures rate “10” evaluation overall, and the stellar lithograph (25″ x 30″) presents at the NM plateau, with light creasing to the white borders. Amazingly, the creation of this soaring litho is believed to be the only commercial autograph project in which the famously reclusive Armstrong has ever participated! Add to this the incredible additional collection of signatures, & you have a very rare piece indeed. Accompanied by a Letter of Authenticity from Steve Zarelli, the finest authenticator in space autographs. Litho is not framed. It will be sent carefully rolled in a large secure poster tube. We have 100% feedback. In the world of autographs. Don’t you agree? Is well established in the field of “in-person” autographs and have a solid reputation. They’ve been featured on ABC’s 20/20 and have been written about in many publications including The New York Times, PEOPLE, US, IN TOUCH, The National Enquirer and Star Magazine, to name a few. BEWARE OF FAKES & FORGERIES. That flood the marketplace! Don’t become a victim! We offer nothing but the finest quality autographed items all with. Auctiva offers Free Image Hosting and Editing. Auctiva gets you noticed! Track Page Views With. Auctiva’s FREE Counter. The item “Naval Aviation in Space Ltd. Ed. Litho Signed by 24 ASTRONAUTS! ARMSTRONG ALDRIN” is in sale since Sunday, November 25, 2018. This item is in the category “Collectibles\Autographs\Space”. The seller is “theipanetwork” and is located in Riverside, California. This item can be shipped to United States.