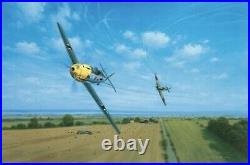 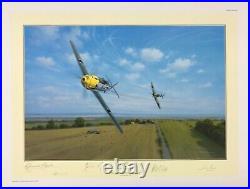 A powerful limited edition depicting one of the most crucial periods of WWII The Battle of Britain. It is September 1940, the height of the Battle of Britain, and a Spitfire of 92 Sqn based at Duxford, is locked in close combat with a Messerschmitt Bf109E just south of the Thames Estuary. The fighters chase each other down to just a few hundred feet both at full throttle, turning and diving, each trying to get the other in his sights. A downed Heinkel He 111 lies in the corn field below whilst high above them the vapour trails of combat weave through the summer sky as the battle rages on. July 10th to October 31st 1940 – The Battle of Britain, a monumental event in British history and a major turning point of WWII. During those few summer months the RAF and Luftwaffe fought what was to become one of the most crucial and decisive aerial conflicts in history. Never before or since has air combat been so intense over such a period of time. The print is personally signed by the artist and four iconic Aces who flew during the Battle of Britain, two from the RAF and two from the Luftwaffe. Group Captain JOHN PEEL DSO DFC – 5 victories Wing Commander GEORGE UNWIN DSO DFM – 13 victories Major HANS-EKKEHARD BOB Knights Cross 60 victories Generalleutnant GUNTHER RALL Knights Cross/ Oak Leaves & Swords – 275 victories. Published in 2002, this limited. It includes iconic Battle of Britain signatures giving. Collectors and autograph hunters alike a unique opportunity to acquire this seldom seen piece. Please ask us for details. YOUR PIECE OF MIND: As a reputable company, if any issues do arise we don’t expect our customers to deal with it. The item “LOW LEVEL ENCOUNTER by Gerald Coulson signed by FOUR Luftwaffe & RAF Aces” is in sale since Sunday, March 22, 2020. This item is in the category “Art\Art Prints”. The seller is “aceshighgallery” and is located in Ojai, California. This item can be shipped worldwide.