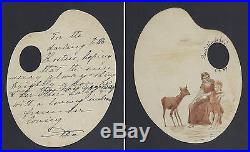 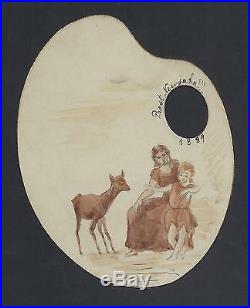 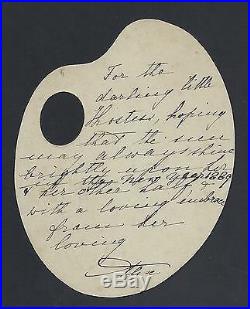 Rare handwritten and signed New Year’s message from Empress Alexandra Feodorovna of Russia (1872 1918). Dated 1889 when she was only seventeen tears old, in the form of an artists palette. On the front of the palette is an amatuer watercolour of a young woman with a child and fawn, probably painted by Alexandra, there is also a New Year’s message also writtten by Alexandra: Prost Neujahr!!! On the other side she has written a short charming mesage: “For the darling little hostess, hoping that the sun may always shine brightly upon her & her other half in the new year 1889 & with a loving embrace from her loving Alix” She was Empress of Russia as the spouse of Nicholas II, the last ruler of the Russian Empire. Originally known as Alix of Hesse and by Rhine, she was a granddaughter of Queen Victoria of the United Kingdom. Upon being received into the Russian Orthodox Church, she was given the name Alexandra Feodorovna and was canonized in 2000 as Saint Alexandra the Passion Bearer. Alexandra was the last Tsarina of Russia and one of the most famous royal carriers of the haemophilia disease that descended from Queen Victoria. Her reputation for influencing her husband’s resistance to the surrender of autocratic authority over the country and her known faith in the Russian mystic, Grigori Rasputin, severely damaged her popularity and that of the Romanov monarchy in its final years. Size: 11 x 8 cm approx. Photos form part of the description. International items may take longer. Bibelotslondon cannot be held responsible for items lost abroad. The item “Empress Alexandra Romanov Imperial Russia Signed Autograph New Year Watercolour” is in sale since Monday, March 12, 2018. This item is in the category “Collectables\Autographs\Uncertified Originals\Historical”. The seller is “bibelotslondon” and is located in london. This item can be shipped worldwide.