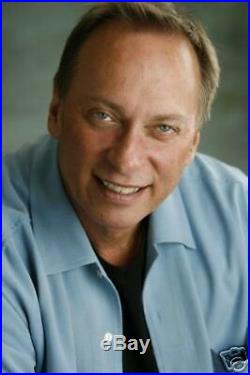 THE GREASEMAN COLLECTION — WITH CUSTOM AUTOGRAPHED. Many buyers do not want a photo — i f you DO WANT a photo please see notes at bottom of listing. This Three-CD-set has been newly manufactured by The Greaseman’s. Each CD is recorded as one long track. All three CDs are presented in one “standard” CD jewel case. The Greaseman’s Shrieker Bowl: This fantastic collection represents the best of the Greaseman’s “Bit Vault”, from his humble beginnings through his rise to vaulted Shriekery. It was broadcast only three weeks before the Greaseman left the air in 1999. He himself introduces his very best bits from his days in Florida and in Washington DC at DC-101. This is one FAN-TASTIC collection and deserves a place in your Greaseman possession! Includes: – Grease’s WAXC aircheck – WAPE 1979 aircheck – From 1978 “Lawman” album – Grease loses his gal to Chauncey – Hoyle tells a Wild West joke – Grease house breaks his dog – Commercial pilot tour – South of the border – Phil Kronenburg original version – 1983 – Hooked on mucus! – Jax aircheck-Late 80’s – Tapioca on the oatmeal!! – Mitch with a hot gal on the line – Lawman in porno shop raid!! – Traffic reporter Robbie Rose’s revenge!! – Hoyle Dempsey in the control room can! – His Famous 1982 “The Bit Without An End” – Aircheck from “The Great 98″ – Lawman finale. Many segments are introduced by his longtime Producer, Bill Scanlon. Includes: – Can Grease Date an Older Woman – A Lawman! Greaseman History, Part Two: This is the second in the incredible collection of bits and airchecks from the Grease. Like Part One, many segments are introduced by his longtime Producer, Bill Scanlon. Includes: – The January 1986 Martin Luther King comment, the Grease’s first collision with Political Correctness – The January 1986 Grease MLK Apology the following day, the local media coverage, and interviews by the Grease – Yo Mama – Clinton it had to be you! – The Italian Dinner – Sample from his Lawman LP – Interview and the following bits from WWDC-101.1 FM (DC-101) in Washington DC (August 1982 through January 1993) – Sgt. Fury – Biff Cantrell of DC-101 Sports. On three newly-released CDs! BONUS: A Personally Autographed. Photo To You From the Doo-Dad Daddy Himself! If brief, whatever you want him to write! GREAT GREASEMAN LINKS: – BEST GREASEMAN WEBSITE: www. All customers treated with promptness and respect. I strive with every trade to maintain my. PLEASE READ LISTING CAREFULLY. The item “THE GREASEMAN COLLECTION & CUSTOM AUTOGRAPHED PHOTO” is in sale since Friday, August 2, 2013. This item is in the category “Music\CDs”. The seller is “dctechguy” and is located in Washington, District Of Columbia. This item can be shipped worldwide.