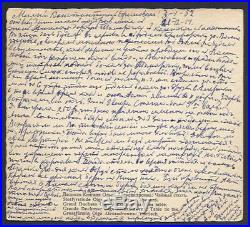 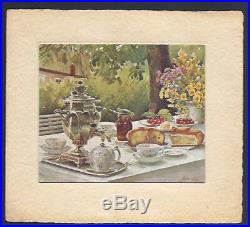 Bibelotslondon Ltd is a UK registered company based in London Bridge dealing in ephemera and curiosities from Britain and around the world. Our diverse inventory is carefully chosen and constantly evolving. We work very hard to offer the highest quality works at competitive prices. Our inventory is listed online, and we strive to keep our website completely up to date, so our customers can easily check availability. We believe in offering clients items that are unique and rare for aficionados of the antique and collector’s world. Bibelot is a late nineteenth century word derived from the French word bel beautiful, meaning a small item of beauty, curiosity or interest. The word ephemera is derived from the sixteenth century Greek word ephmera meaning a printed or hand written paper not meant to be retained for a long period of time. Charming Christmas card from Grand Duchess Olga Alexandrovna of Russia (1882 1960), for 1951/1952 (dated Old Style and New Style), witten in Russian and addressed to a family friend Konstantine Efimovich and congratulating his family for his child’s name’s day and birthday. 3-1-52 21-12-51 Dear Konstantin Efimovich, From the bottom of our hearts we congratulate dear Tamarochka and Kolenka with the name day and a birthday boy. On this day we will be at the church and will eat holy bread for your health, and in the evening we will transfer to you in our thoughts and we will remember how well and comfortably we used to spend it together. We welcomed in the New Year as always at the Volnovs, and during the dinner, my little scamp raised a glass to Tamarochka, which made us all laugh: true love never grows old. First there was the Ninth Wave. I won 250 fr, which was nice especially on New Years. Did you celebrate with your family as well, or did the owners already return for the holidays? If so, you probably were very busy. Are you happy with your apartment? Is it difficult to climb stairs without an elevator? We have here many forests of Christmas trees in the city as never before, they are all dressed and lit with lots of Christmas lights. At Victoire its like a carnival. The weather was warm and sunny all the time. Just two days ago it suddenly became cold, and we could feel it. There are horrible storms around, but God still watches us. When reading about your snow and storm, we were worried that they would affect your health xxx. Knowing how busy you are, and how you want to rest at your leisure time, do not bother writing letters of reply, but when you decide to drop a line, it will be a great pleasure for us. Keeping you in mind, your friends xxx xxx xxx She was the youngest child of Emperor Alexander III of Russia and younger sister of Tsar Nicholas II. She was raised at the Gatchina Palace outside Saint Petersburg. Olga’s relationship with her mother, Empress Marie, the daughter of King Christian IX of Denmark, was strained and distant from childhood. In contrast, she and her father were close. He died when she was 12, and her brother Nicholas became emperor. In 1901, she married Duke Peter Alexandrovich of Oldenburg, who was privately believed by family and friends to be homosexual. Their marriage of 15 years remained unconsummated, and Peter at first refused Olga’s request for a divorce. The couple led separate lives and their marriage was eventually annulled by the Emperor in October 1916. The following month Olga married cavalry officer Nikolai Kulikovsky, with whom she had fallen in love several years before. During the First World War, the Grand Duchess served as an army nurse at the front and was awarded a medal for personal gallantry. At the downfall of the Romanovs in the Russian Revolution of 1917, she fled to the Crimea with her husband and children, where they lived under the threat of assassination. Her brother and his family were shot by revolutionaries. Olga escaped revolutionary Russia with her second husband and their two sons in February 1920. They joined her mother, the Dowager Empress, in Denmark. In exile, Olga acted as companion and secretary to her mother, and was often sought out by Romanov impostors who claimed to be her dead relatives. She met Anna Anderson, the best-known impostor, in Berlin in 1925. She led a simple life: raising her two sons, working on the farm and painting. During her lifetime, she painted over 2,000 works of art, which provided extra income for both her family and the charitable causes she supported. In 1948, feeling threatened by Joseph Stalin’s regime, Olga emigrated with her immediate family to a farm in Ontario, Canada. With advancing age, Olga and her husband moved to a bungalow near Cooksville, Ontario. Colonel Kulikovsky died there in 1958. Two years later, as her health deteriorated, Olga moved with devoted friends to a small apartment in East Toronto. She died aged 78, seven months after her older sister, Xenia. At the end of her life and afterwards, Olga was widely labeled the last Grand Duchess of Imperial Russia. Size: 15 x 14 cm approx. Photos form part of the description. The item “Grand Duchess Olga Romanov of Imperial Russia Antique Signed Christmas Card 1952″ is in sale since Sunday, November 25, 2018. This item is in the category “Collectables\Autographs\Uncertified Originals\Historical”. The seller is “bibelotslondon” and is located in London. This item can be shipped worldwide.