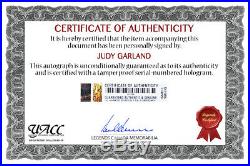 JUDY GARLAND SIGNED CHEQUE. During a career that spanned 45 years, she attained international stardom as an actress in both musical and dramatic roles, as a recording artist, and on the concert stage. Respected for her versatility, she received an Academy Juvenile Award, a Golden Globe Award, a Special Tony Award, and was the first woman to win the Grammy Award for Album of the Year for her 1961 live recording Judy at Carnegie Hall. Garland began performing in vaudeville as a child with her two older sisters and was later signed to Metro-Goldwyn-Mayer as a teenager. She appeared in more than two dozen films for MGM and is best remembered for her portrayal of Dorothy Gale in The Wizard of Oz (1939). Garland was a frequent on-screen partner of both Mickey Rooney and Gene Kelly and regularly collaborated with director and second husband Vincente Minnelli. Other notable film appearances during this period include roles in Meet Me in St. Louis (1944), The Harvey Girls (1946), Easter Parade (1948), and Summer Stock (1950). Garland was released from MGM in 1950, after 15 years with the studio, amid a series of personal struggles that prevented her from fulfilling the terms of her contract. Garland struggled in her personal life from an early age. The pressures of early stardom affected her physical and mental health from the time she was a teenager; her self-image was influenced and constantly criticized by film executives who believed that she was physically unattractive and who manipulated her onscreen physical appearance. Her lifelong struggle with substance use disorder ultimately led to her death in London from an accidental barbiturate overdose at age 47. This item is supplied with a serial-numbered hologram Certificate of Authenticity. Canada Post does not offer tracking on this service without a surcharge. ABOUT LEGENDS CANADA MEMORABILIA. Legends Memorabilia was established in 1995 to provide distinctive memorabilia from the world of Film, Television, History, Music, Aviation and Space. Paul Brown, the founder of Legends started dealing in memorabilia following several years as a sound engineer in the music industry. His association with music stars became the catalyst for his memorabilia business as he developed relationships with celebrities in the film and television industry. Over the past 25 years Legends has offered unique memorabilia to clients in 78 countries including. FILM/TV, HISTORY & MUSIC MEMORABILIA ORIGINAL PROPS & COSTUMES STUDIO ART. Legends Memorabilia has hosted many online auctions offering original film and television production items from several leading studios including. In 2005 Paul Brown started working closely with Richard Dean Anderson in support of various conservation organizations, most notably the Sea Shepherd Conservation Society , of which Richard and Paul are Advisory Board members. Paul also manages Richard’s appearances at fan conventions as they continue to promote conservation. Track Page Views With. Auctiva’s FREE Counter. The item “Cheque signed by legendary star JUDY GARLAND” is in sale since Saturday, February 29, 2020. This item is in the category “Collectibles\Autographs\Celebrities”. The seller is “legends-canada-memorabilia” and is located in Langley, British Columbia. This item can be shipped worldwide.