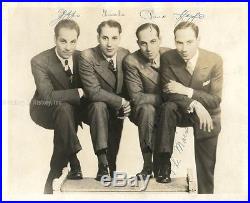 Make an Offer Today and Get a Quick Response! Take a Look at This Week’s Specials! THE MARX BROTHERS – PHOTOGRAPH SIGNED CO-SIGNED BY: HARPO (ADOLPH) MARX, ZEPPO (HERBERT) MARX, CHICO (LEONARD) MARX, GROUCHO (JULIUS) MARX – HFSID 278499. THE MARX BROTHERS: GROUCHO MARX, HARPO MARX, CHICO MARX, and ZEPPO MARX. Rare signed sepia-toned 9¾x7¾ publicity photo of the Marx Brothers in suits and ties and playing it straight. “For Wm Consteul/Sincerely yours/The Marx Brothers”. B/w sepia-toned, 9¾x7¾ overall, 9¼x7 image, one surface. Appeared together on Broadway before appearing in films from 1929 to 1950, with. Their greatest comedic performances including. A Night at the Opera. A Day at the Races. The leader of the zany Marx Brothers, Groucho Marx. Born Julius Henry Marx in New York City. Enjoyed success in vaudeville, on Broadway, in motion pictures and on television. He was famous for. His crouched walk, greasepaint mustache, ever-present cigar, and lecherous glances at female co-stars. Groucho also hosted the radio and TV comedy quiz show. You Bet Your Life. Known for his pantomime and harp playing. Comedies, in which he also chased blondes and created general mayhem. Ironically, he never truly learned how to play; as a young boy, he developed his own way of tuning the instrument. He usually wore a pink (later red) wig, but in the black and white film era, it looked blonde. As the silent participant in the various comedy acts he had a role in, his character was drawn from the silent character archetype of traditional vaudeville acts. In 1961, the “silent Marx brother” published. Was the oldest of the five. And one of the main three performers (including Groucho and Harpo). These three brothers appeared in 17 films together, 1 unreleased and probably lost. In most of the films, Chico and Harpo play a troublemaking, crime-committing duo, with Harpo in the silent dunce role and Chico playing the crafty but dim-witted leader. After the brothers’ mother and business manager passed away in 1929, Chico took over as business manager for the comedy group. He is credited with the first deal for performers that involved the receiving of a set percentage of a production’s gross receipts. During the war years. Headed his own orchestra. And created a solo comedy act that he continued into the late 1940s. Chico was a skillful imitator of Italian dialect, and he played the piano well enough to entertain an audience. Financial difficulties were a major factor in the group’s decision to remain active into the late 1940s and 1950s. A Night in Casablanca. (1946) to help their brother pay off his gambling debts. Youngest of the Marx Brothers. Joined the act after brother. Played the straight man to his brothers and starred in romantic roles. With Groucho, Chico and Harpo on Broadway and in their first five films. He left the act in 1933 to pursue other business interests, including running a talent agency. Somewhat of a mechanical whiz. Zeppo invented a wristwatch that would monitor the pulse rate of cardiac patients. And his company, Marman Products. Produced clamping devices that were used in the first atomic bomb raids over Japan in 1945. He stepped away from the stage’s spotlight but, as an inventor and engineer, made millions of dollars. Lightly toned, soiled, stained, cracked and rippled. Parts of inscription are faint but legible. Tack holes in upper corners. Light spotting on image (not visible head-on). See more material from these signers. See more listings in our ACTORS & ACTRESSES (11,072). Please note that this is an authentically signed item. We do not sell autograph copies or signature reprints. Images shown may contain our company watermark. The actual document does not contain this watermark. This item has been authenticated and is accompanied by a Certificate of Authenticity issued by our parent company, Gallery of History, Inc. We financially stand behind our COA. Ask us about our PSA/DNA and JSA authentication guarantee. Our Third & Best Handbook – The One You Want On Historical Documents! Enhance your collecting experience. For the experienced and novice collector and for those who just love learning history this beautiful 253-page hardcover volume is for you! Take a look at over. Other listings in these categories. And This Week’s Specials. Gallery of History is the world’s largest dealer of authentic autographs and manuscripts. Our inventory contains documents in all areas of interest including presidents, royalty, military, aviation, religion, business, science, celebrities, sports, music, authors and more. Whether looking to add to your collection, acquire a unique centerpiece for the home or office, or as a truly one-of-a-kind gift for someone special, you’ll find it here at HistoryForSale. The Gallery of History. Founded in 1981, is a long-standing UACC Registered Dealer, #RD110, and is a long-standing member of the Manuscript Society. The Gallery of History is the largest dealer in the world with an available inventory that exceeds 200,000 rare autographs and manuscripts. Preserving historical documents is important to us. Our unframed items are sent to you either in acid- free Mylar. Sleeves or have been encapsulated in acid-free Mylar. Our framed items are encapsulated in Mylar to guard against organic acids, mounted in an acid-free enviroment and are framed behind UF3-AR Plexiglas which blocks out approximately 94% of the ultraviolet light. We warrant to the original purchaser for a period of ten (10) years from the date of the sale the authenticity of any autograph offered by HistoryForSale. Gallery of History is not liable for any other damages, including consequential damages. There are no other warranties of any nature either expressed or implied, including but not limited to the warranties of merchantability and fitness for a particular purpose. The item “THE MARX BROTHERS PHOTOGRAPH SIGNED WITH CO-SIGNERS” is in sale since Wednesday, January 18, 2017. This item is in the category “Collectibles\Autographs\Movies”. The seller is “historydirect” and is located in Las Vegas, NV. This item can be shipped worldwide.