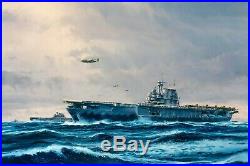 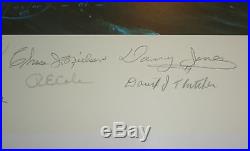 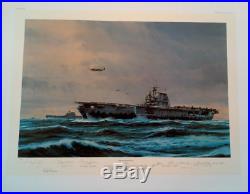 A STUNNING LIMITED EDITION BY ONE OF THE WORLDS FOREMOST AVIATION ARTISTS PAYING TRIBUTE TO THE LEGENDARY DOOLITTLE RAIDERS. SPECIAL FOURTEEN SIGNATURE COLLECTORS PIECE. As the USS Hornet pitches and rolls in the mid-Pacific Swell, the Tokyo raid gets under way. Jimmy Doolittle’s B-25, safely airborne and having completed a 360 degree turn, flies over the carrier to check his compass while the number two aircraft rolls down the deck under full throttle. On the stormy morning of 18 April 1942, Doolittle led a force of sixteen specially modified B-25 bombers each with a crew of five men – to strike military targets in the heart of Japan, giving America and its allies an important and badly needed morale boost in the wake of the destruction at Pearl Harbor. The plan was to hit their targets and then head for China to land their B-25s at predetermined airfields, as landing a medium bomber onto the Hornet would be impossible. However, after being discovered, the aircraft were forced to launch earlier than planned, meaning they would not have enough fuel to complete the return journey. Most crews bailed out, a few made water landings, and one crew diverted to land in Vladivostok, Russia, where they were interned by their Soviet allies. Eight men were captured and tortured by the Japanese, who executed three following a mock trial; Four of the POWs survived to return home. The thrilling story of Doolittles Tokyo Raiders is one most legendary and courageous missions of World War II. The print is individually numbered and personally signed by the artist along with twelve. Pilots and crew that flew on the famous Doolittle Raid on that fateful day in April 1942. Jimmy Doolittles Co-Pilot, Crew #1 – Target Tokyo. Jimmy Doolittles Navigator, Crew #1 – Target Tokyo. Pilot, Crew #5 – Target Tokyo. Navigator / Bombardier, Crew #6 – Target Tokyo. Flight Engineer/Gunner, Crew #7 – Target Tokyo. Navigator / Bombardier, Crew #8 – Target Tokyo. Co-Pilot, Crew #10 – Target Tokyo Lt. Navigator / Bombardier, Crew #11 – Target Yokohama. Pilot, Crew #12 – Target Yokohama Lt. Navigator / Bombardier, Crew #14 – Target Nagoya Lt. Co-Pilot, Crew #16 – Target Nagoya. Bombardier, Crew #16 – Target Nagoya. This particular copy has been additionally autographed by two further Doolittle Raiders to create a special fourteen signature collectors piece: MSgt. Flight Engineer/Gunner, Crew #10 – Target Tokyo. Navigator / Bombardier, Crew #9 -Target Tokyo. Our items are guaranteed to be in perfect condition, unless clearly specified otherwise. YOUR PIECE OF MIND: As a reputable company, if any issues do arise we don’t expect our customers to deal with it. The item “COMPASS HEADING 270° by Robert Taylor rare print signed 14 Doolittle Raiders” is in sale since Saturday, April 6, 2019. This item is in the category “Art\Art Prints”. The seller is “aceshighgallery” and is located in Ojai, California. This item can be shipped worldwide.