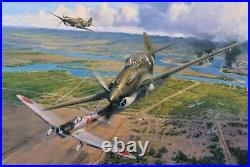 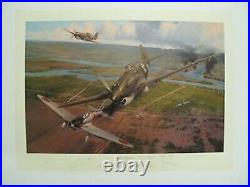 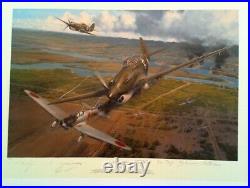 A HISTORIC PRINT COMMEMORATING PEARL HARBOR, DECEMBER 7, 1941. USAAF pilot Ken Taylor in his P-40 tomahawk brings down his second enemy aircraft on December 7, 1941, an Aichi D-3Al’ Val’ dive-bomber, with fellow pilot George Walsh flying in close company. In the background smoke rises from Hangar 6 housing the naval float planes, and the up-turned battleship Oklahoma. The very first air combat fought by American pilots following the surprise attack upon Pearl Harbor. In less than one hour America struck back in a war that was to end in total victory. As the assault mounted on the Pacific Fleet in Pearl Harbor, simultaneously the air base at Wheeler Field came under heavy attack. Two young USAAF pilots, Kenneth Taylor and George Walsh, quickly got their P-40 Tomahawks airborne. Winging southwards towards Ewa Field they ripped into a dozen or more enemy aircraft attacking the marine field. Diving into the formation they each downed’Val’ fighter-bombers. The prints are personally signed by the artist Robert Taylor and pilots who took part in the action at Pearl Harbor and veterans of the Pacific Air War. One of the Armys heroes on December 7 he was one of the few pilots that managed to get airborne and along with George Walsh shot down six Japanese aircraft between them – he was awarded the DSC for his action. He continued to fly in the Pacific at Guadalcanal adding two more victories. Colonel DAVID TEX HILL. After serving aboard the USS Saratoga and USS Ranger as a navy pilot, Tex volunteered for the AVG Flying Tigers in China, becoming Squadron Leader in the 2nd Squadron (Panda Bears), and notching up 12¼ air victories. He remained in China to activate the 75th Fighter Sqn and later commanded the 23rd Fighter Group, again in China, increasing his total score to 18¼ air victories. Colonel WILLIAM DICKMAN A USMC Pilot, he took part in the defense of Ewa Field on the ground but was wounded during the attack. He went on the fly 60 combat missions throughout the Pacific Theatre including Guadalcanal, Iwo Jima and Okinawa. Lieutenant General JOE MOORE He flew P-40 Tomahawks with the 323rd Tactical Fighter Wing from the Phillipines, accumulating more than 100 combat missions and two victories over Japanese Zeros. He later moved to Europe, flying P-47s during the Normandy Invasion. Colonel EARL WILLIAMS Whilst flying a B-17 with the 38th Reconnaissance Squadron from Hamilton Field he ran straight into the Japanese attack and was hit but managed to land his aircraft at Oahu. He flew 60 combat missions in the Pacific, including the Battle of the Coral Sea. Brigadier General JAMES VAN DE HEY He was at Wheeler Field during the attack and then flew the P-40, P-47 and P-51 in the Pacific, including Midway and Iwo Jima in command of the 78th Fighter Squadron. In 262 missions he claimed four victories and on April 7, 1945 led the first fighter squadron over Tokyo while escorting B-29 bombers. Published in 2001 to commemorate the 60th Anniversary of the attack on Pearl Harbor, this powerful print is personally signed by iconic veterans that took part. Please ask for details. Our items are guaranteed to be in perfect condition, unless clearly specified otherwise. YOUR PIECE OF MIND: As a reputable company, if any issues do arise we don’t expect our customers to deal with it. The item “America Strikes Back by Robert Taylor signed by Tex Hill & Pearl Harbor Veterans” is in sale since Monday, June 17, 2019. This item is in the category “Art\Art Prints”. The seller is “aceshighgallery” and is located in Ojai, California. This item can be shipped worldwide.