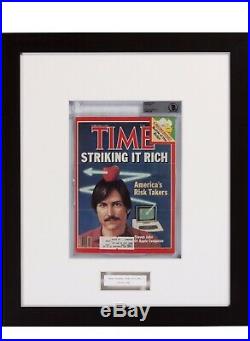 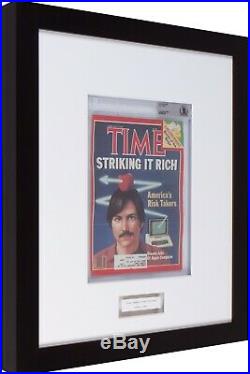 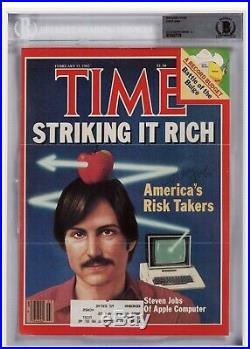 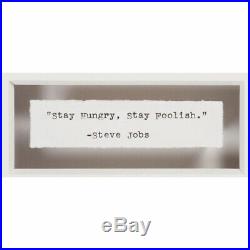 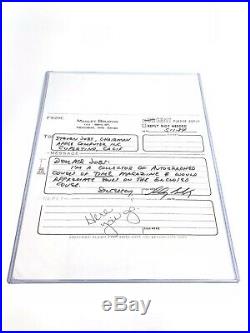 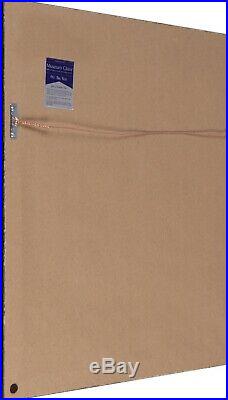 Incredibly Rare STEVE JOBS Signed TIME Magazine Cover 1982 JSA/PSA. THE ONLY KNOWN AUTHENTIC STEVE JOBS AUTOGRAPH AVAILABLE IN THE WORLD. We started out to get a computer in the hands of everyday people, and we succeeded beyond our wildest dreams. Steve Jobs had a vision for the personal computer that sparked the PC revolution and ultimately made Apple an icon of American business. In 1975, 20-year-old Steve Jobs and Steve Wozniak set up shop in Jobs’ parents’ garage, and began working on the prototype of the Apple I. After a redesign of the Apple I they introduced the Apple II in 1977, the first personal computer with color graphics and a keyboard. The Apple II revolutionized the the business of Computers and turned Apple into a powerhouse for the next few years. However In 1985, After slow sales, and disagreements with Apples Board, Steve was forced out of the company that he had started. Jobs surprised everyone when he pulled off the comeback of the Century though, when he was rehired at Apple in 1996 and introduced the iMac and the iPod and eventually the iPhone and iPad that have revolutionized business and has made Apple the most successful company in the world. His fledgling graphics company Pixar, became a film powerhouse, releasing hit movies like Toy Story, Finding Nemo, and Cars. Steve Jobs pulled off one of the biggest comebacks in business history. His story has inspired generations of Tech entrepreneurs everywhere. This wonderful TIME Magazine cover titled Americas Risk Takers, from February 15, 1982, is Steve Jobs very first magazine cover, slating him as Apple Computers maverick leader. Our documentation, that is included, gives provenance, and shows the signature was obtained sometime around July of 1984(see photos). Of the few signatures that we know of, very few were obtained during his first employment at Apple and most were obtained later during his comeback, giving this early signature even greater significance. Steve Jobs was notorious for not signing autographs and his signature has become scarce and highly sought after. In 2005, during what most people consider the most magnificent speech of his life, his commencement speech at Stanford University, he recounted his story of impossible odds and huge failures, and also his incredible successes. At the end he left his motivated audience with these inspiring words that weve included below the signed magazine. Stay Hungry, Stay Foolish -Steve Jobs. All of this is beautifully framed in our hand built, contemporary, wide frame, enhanced with professional white matting. As with all of our works, every piece is original. Only the highest quality materials have been used in the assembly of this item. Sourced from the best manufacturers around the world, we build every frame tailored specifically for the item it will hold. Protected with 99% UV museum quality glass, and carefully crafted with acid free paper whenever possible. Our premium wood moldings, used to make this contemporary frame, are cut using the newest technology and every single piece is assembled and inspected by our team here in Los Angeles. All autographs have been authenticated by third party experts from the top authenticators in the country, and notarized certificates of authenticity are included in a black leather portfolio. This piece, because of its nature, has been twice authenticated by two top authenticators. Copies of the original authentications are kept on file with Billionaire Collectibles and can be retrieved by the original purchaser. For this item we have both a Beckett and JSA Authentications. The item “Incredibly Rare STEVE JOBS Signed TIME Magazine Cover 1982 JSA/PSA” is in sale since Monday, April 29, 2019. This item is in the category “Collectibles\Autographs\Historical”. The seller is “wesellstuff28″ and is located in Highland, California. This item can be shipped to United States.