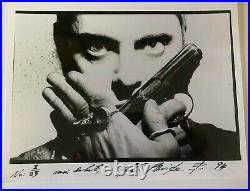 Classic Genesis P-Orridge pose with pistol from PTV/TOPY days. This is an 8×10 photo on heavy photographic paper; GPO used this image in press releases/concert promotion during the 1990s and possibly the 1980s. About the Photo & Numbering/Limitation. This photo is from a limited edition of 23 photo prints that GPO sent to me back in 1994. He hand numbered, signed, and dated each of the photos. The photos were supposed to be part of a deluxe limited edition set for recordings from a concert I organized and promoted at the time. These sets were to include signed photos, limited edition collages, and official limitation pages. This was back in the mid-1990s when GPO was in self-imposed exile, first living in NorCal (Russian River area, I think) and then later moving to New York City to be with Miss Jackie. At the time, there was not a lot of interest in PTV, as such, and there were multiple shifts in the band’s lineup. Checking the catalogue shows the range from ambient, spoken word performances to the more rockish, trippy Trip Reset album to experimental works. This was also when, if memory serves, there was a struggle over TOPY’s future and lots of legal shenanigans and possible legal threats in the UK. Given all these factors, and the lack of any real robust Internet/Web, it was challenging for a wannabe record label noob like myself to get any distribution or sales. There are likely other copies of this photograph floating around. However, I figure if you’re interested in purchasing this photo–or at least knowing about it–then it would be helpful to know why it was numbered and signed. In terms of authenticity and provenance, a bit of back history will help. During 1993 and 1994, we organized two concerts in Eugene, Oregon, with GPO/PTV. This was when GPO was in self-imposed exile in California. Until 2001, our friendship with Gen and Miss Jackie deepened, and GPO sent us a number of signed albums, flyers, cards, art, etc. During this time, Gen was incredibly generous with us and we with he and Miss Jackie. They visited us in Oregon several times–each time they brought more signed items for our collection. On several albums, and in a few publications, GPO referred to us by our nicknames, T. In 2001, we had an unresolvable mutual disagreement with Gen and we ceased all contact with each other. It was a hard but necessary split. I plan to list some of these items in the coming days and weeks. Obviously we value our collection; however, we’d like to share with folks. Photos, art, and cards are sent in rigid cardboard envelopes to protect the photo. We are avid bibliophiles who rigorously grade our materials. If anything, we under grade. We love books and signed photographs, especially signed first editions, and we treat our books–eventually your books–with care and respect. All photos are packaged extremely well to preserve and protect the condition. This item is in the category “Collectibles\Autographs\Celebrities”. The seller is “mrgreg23″ and is located in this country: US. This item can be shipped to United States.