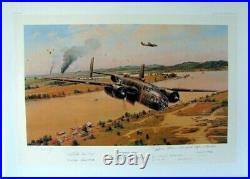 Published specially to commemorate the historic’Doolittle’ raid on Tokyo, April 18, 1942. Doolittle Raiders take their B-25 bombers down to very low level and head for China after delivering their surprise attack on the industrial and military targets in and around Tokyo on April 18, 1942. At 8.20am on April 18, 1942, just four months after the Japanese attack on Pearl Harbor, a small force of B-25 Mitchell bombers under the command of Colonel Jimmy Doolittle, took off from the aircraft carrier Hornet. Unlike any other mission before or since, the crews departed on their dangerous journey with the full knowledge that each was on a one-way ticket. They achieved all of these, and in so doing effected what became one of the most remarkable air raids of World War II. The orders were precise: At low-level, fly some 800 miles over water into hostile territory, without escort fend off attacks from air and ground fire over the target then, with insufficient fuel to make the return journey, fly the B-25s on towards China until the gas ran out. Then bail out, ditch, or crash-land, avoid capture, and somehow find a way home. Every man was a volunteer. Each knew the dangers. Some paid with their lives. Smoke plumes high in the air as following aircraft dodge the flak; With possibly the worst to come, the Doolittle Raiders head out into the unknown. Soon, with tanks empty, and in gathering darkness, eleven crews will bail out, three will ditch in coastal waters, and two will crash-land. Two crews will be taken prisoner; seven men will never return. The print is individually numbered and personally signed by the artist along with FOURTEEN. Pilots and crew that flew on the famous Doolittle Raid on that fateful day in April 1942. Jimmy Doolittles Co-Pilot, Crew #1 – Target Tokyo. Jimmy Doolittles Navigator, Crew #1 – Target Tokyo. Pilot, Crew #5 – Target Tokyo. Navigator / Bombardier, Crew #6 – Target Tokyo. Flight Engineer/Gunner, Crew #7 – Target Tokyo. Navigator / Bombardier, Crew #8 – Target Tokyo. Co-Pilot, Crew #10 – Target Tokyo Lt. Navigator / Bombardier, Crew #11 – Target Yokohama. Navigator, Crew #4 – Target Tokyo Lt. Navigator / Bombardier, Crew #14 – Target Nagoya Lt. Co-Pilot, Crew #16 – Target Nagoya. Bombardier, Crew #16 – Target Nagoya. Navigator / Bombardier, Crew #9 -Target Tokyo. HOWARD SESSLER Navigator/Bombardier, Crew #15 – Target Nagoya. Please ask for details. Matted & framed pieces are’flat packed’ in substantial packaging. YOUR PIECE OF MIND: As a reputable company, if any issues do arise we don’t expect our customers to deal with it. Please note: The signatures on our pieces are not reproductions, they are original autographs, hand-signed by the veterans involved. The item “THE DOOLITTLE RAIDERS by Robert Taylor signed by 14 Doolittle Raiders” is in sale since Wednesday, October 9, 2019. This item is in the category “Art\Art Prints”. The seller is “aceshighgallery” and is located in Ojai, California. This item can be shipped worldwide.