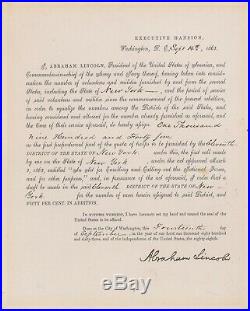 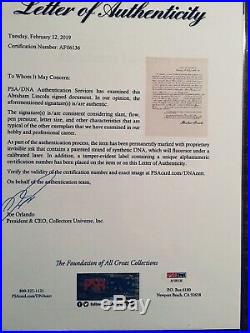 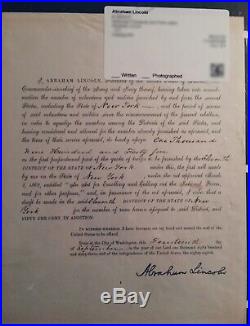 Rare President ABRAHAM LINCOLN Signed Executive MansionLetterhead 1863 PSA/JSA. Great things may come to those who wait, but only the things left by those who hustle. This is a Magnificent, and rare, Civil War-dated document, beautifully hand signed by Abraham Lincoln as president. This incredible letter, on Executive Mansion letterhead, is dated September 14, 1863 and is a draft order issued by President Lincoln, which reads, in full. I, Abraham Lincoln, President of the United States of America and Commander-in-Chief of the Army and Navy therof, having taken into consideration the number of volunteers and militia furnished by and from the several States, including the State of New York, and the period of service of said volunteers and militia since the commencement of the present rebellion, in order to equalize the numbers among the Districts of the said States, and having considered and allowed for the number already furnished as aforesaid, and the time of their service aforesaid, do here by assign One Thousand Nine Hundred and Forty five as the first proportional part of the quota of troops to be furnished by the Eleventh District of the States of New York, under this, the first call made by me on the State of New York, under the act approved March 3, 1863, entitled’An Act for Enrolling and Calling out the National Forces, and for other purposes,’ and, in pursuance of the act aforesaid, I order that a draft be made in the said Eleventh District of the State of New York for the number of men herein assigned to said District, and Fifty Per Cent, In Addition. Signed boldly at the conclusion in full Abraham Lincoln. This 150 year old document is amazingly in very good to fine condition, with some light creasing (primarily to the top). Abraham Lincoln, born February 12, 1809, could be Americas greatest president. His incredible leadership kept the Union together through the Civil War and his actions to abolishing slavery in the United States, undoubtedly made his mark on history. But when Abraham Lincoln took the oath of office in 1861 to become the 16th president of the United States, it had not been an easy road. It was the culmination of a long, difficult journey filled with disappointments, setbacks, and failures. Just months before receiving his party’s nomination for President, he offered a brief sketch of his early life. My parents were both born in Virginia, of undistinguished families. My mother died in my tenth year. When I came of age I did not know much. Still somehow, I could read, write, and cipher… But that was all. Lincoln, An avid reader and tireless worker, sought the knowledge and experience he needed to pursue his ambitions. Given his early failures in business, politics and life, no one would have blamed him had he given up. He failed in business in’31. He was defeated for state legislator in’32. He tried another business in’33. His fiancee died in’35. He had a nervous breakdown in’36. In’43 he ran for congress and was defeated. He tried again in’48 and was defeated again. He tried running for the Senate in’55. The next year he ran for Vice President and lost. In’59 he ran for the Senate again and was defeated. In 1860, the man who signed his name A. Lincoln, the man whose unflagging faith in himself seemed to grow with every failure, was elected the 16th President of the United States. The item “Rare President ABRAHAM LINCOLN Signed Executive MansionLetterhead 1863 PSA/JSA” is in sale since Monday, April 29, 2019. This item is in the category “Collectibles\Autographs\Political\Presidential”. The seller is “wesellstuff28″ and is located in Highland, California. This item can be shipped to United States.